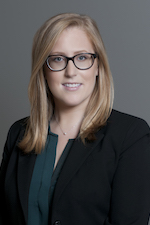 A California native, Ms. Rodriguez is a magna cum laude graduate of the Thomas Jefferson School of Law in San Diego, where she graduated fourth in her class. While attending law school, Ms. Rodriguez served as Chief Notes Editor on Thomas Jefferson's Law Review and authored a published Note in the Thomas Jefferson Law Review. Her published Note discusses the court's role and discretion in child dependency and custody matters where one parent lives in California and one parent lives outside the United States. Ms. Rodriguez's Note was written as a result of her strong interest in families and children, and the family law court system.

During law school Ms. Rodriguez was a certified legal intern with the San Diego County District Attorney's Office, where she appeared in court on behalf of the People of the State of California. Also, while in law school Ms. Rodriguez received a full merit scholarship and many highest-grade awards, including Family Law, Federal Income Tax and Professional Responsibility.

Prior to joining the firm, Ms. Rodriguez was an associate in a San Diego firm practicing business and corporate litigation, securities arbitration and litigation, and employment litigation, representing both individual and commercial clients.

Ms. Rodriguez is a member of the State Bar of California and the San Diego Family Law Bar Association.