The Importance of Complying with Discovery Orders 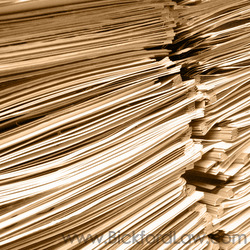 Family law is a unique area of law because it requires the parties to be forthright with disclosure of all material facts at the beginning of each case regardless of whether a request for information has been made.  After the initial disclosure phase of a divorce case, many litigants and attorneys still have questions regarding the income, expenses, assets, and debts of both parties.  If that is the case, the parties may propound discovery asking the other side to answer specific questions and/or provide identified documents.  Unfortunately, it is not uncommon for family law litigants and lawyers to fail to respond to properly propounded discovery requests or provide inadequate responses to discovery. If the propounding party is unsatisfied with the discovery responses (or lack thereof) provided by the other side, his or her divorce attorney may file a motion to compel.

Issue SanctionsAn issue sanction is an order that particular facts be “taken as established” against the party guilty of discovery misuse.  This can be particularly helpful to a divorce attorney representing a party with a heavy burden of proof who attempts to gather information through discovery but is not successful.  For example, if a party is attempting to prove that an asset acquired during marriage is separate property; however, the other party refuses to participate in the discovery process, the court may take the fact that the asset is separate property as established.  In that case, the propounding party is relieved of the burden of proof.

Terminating SanctionsTerminating sanctions are the most severe sanctions and are only typically granted as a second or third form of reprimand.   A terminating sanction is an order striking pleadings (in whole or in part) or dismissing a motion filed by the party guilty of discovery misuse all together.  The court may also stay the action indefinitely until the non-complying party and his or her attorney has properly responded to the discovery requests.

Please contact us if you are considering a divorce from your spouse, a legal separation, or have questions regarding child custody and visitation. Nancy J. Bickford is the only attorney in San Diego County representing clients in divorces, who is a Certified Family Law Specialist (CFLS) and who is actively licensed as a Certified Public Accountant (CPA). Don't settle for less when determining your rights. Call 858-793-8884 in Del Mar, Carmel Valley, North County or San Diego.